This recipe combines beautiful Asian flavours like coconut, soy and lime juice with the moistness of a Quorn Vegan Breaded Fillet to create a winning dish for the whole family. Load up on as much chili as you like and enjoy this protein-rich meal accompanied by a fresh wings bean salad. 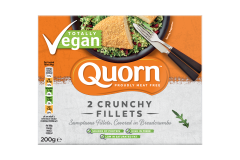 Made with Quorn Vegan Breaded Fillet

A classic Cantonese dish that is the ideal combination of crispy Quorn pieces coated in a flavouful sweet and sour...

If you want to know how to make risotto, this recipe is for you, quick, easy and bursting with goodness.

Try our tasty take on this baked enchilada recipe, made with deliciously healthy Quorn Mince, vegetables and topped...