For a quick and easy meal, use Quorn's Mince to make juicy stuffed peppers packed with flavour.

Tip : The recipe can be made in advance and refrigerated for up to 24 hours or frozen before baking 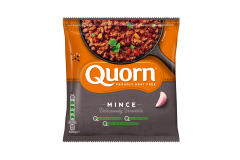 This gorgeously exotic Brazilian Quorn Pieces coconut curry recipe is made with creamy coconut milk for the perfect...

Dive into the taste of Hawaiian paradise with this delicious Quorn burger and mango salsa recipe. Serve your Quorn...