Brighten up your evenings with this vibrant and colourful recipe. The sweetness from the mango salsa mixed with the crunch from the slaw will be sure to have you coming back for more!

For the Crunchy Slaw:

For the Mango Salsa:

For the Vegan Coriander Yoghurt dressing: 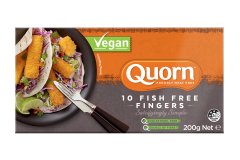 Made with Quorn Vegan Fishless Fingers

Get creative and add Quorn Pieces to your chow mein for a delicious noodle dish. Enjoy your favourite meat free dish...

Easy to make at home, this tasty ramen noodle bowl makes a delicious and healthy dinner.

A classic Cantonese dish that is the ideal combination of crispy Quorn pieces coated in a flavouful sweet and sour...