Our super tasty Hot and Spicy Vegan Burgers are packed with fresh flavours and textures to create this Mexican inspired recipe. Smashed avocado, vegan yoghurt, jalepenos and fresh coriander are layered in a seeded bun and served simply with a griddled corn salsa.

For the grilled corn salsa: 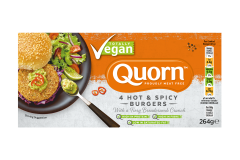 A fiery Sichuan classic, that gives you maximum flavour for minimum effort. It packs a punch with the rich and spicy...