Skip to main content
Quorn
Quorn Sausage Breakfast Quesadilla Recipe 2.9375 out of 5, 1 based on 16 ratings

Give yourself a scrumptious start to the day with a delicious and satisfying Quorn Sausage breakfast quesadilla. Wrapped in a soft tortilla, this Mexican favourite is packed with savoury cheese, chopped up Quorn Sausages fried until they’re golden brown, and eggs, all flavoured with subtle notes of smoked paprika. An unbeatable breakfast for champions. 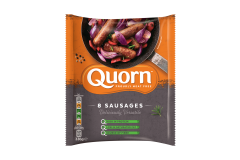 Made with Quorn Sausages

Enjoy a smoky twist on traditional tacos with this chipotle infused recipe. The chipotle paste, garlic and onion mix...

A simple but nutritious home-cooked favourite that is tasty yet refreshing! The silky smooth tofu compliments the...

Get creative and add Quorn Pieces to your chow mein for a delicious noodle dish. Enjoy your favourite meat free dish...